Cobalt’s 2015 Ray Britt Safety Award, which recognizes an individual or group who demonstrated exceptional leadership, passion and commitment to Health, Safety, Security and Environment in 2015, was presented to co-winners Linda Trefren and Erin Freeman on February 18, 2016. 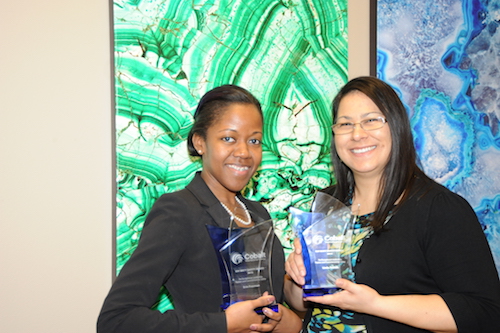 "Our winners are being recognized with the 2015 Ray Britt Safety Award because they modeled the essence of this award by demonstrating initiative and leadership," stated Van Whitfield, Cobalt’s Chief Operating Officer and Executive Vice President.  "Their quick thinking and immediate action may have saved their colleague's life."

In mid-June, a Cobalt employee traveled from overseas to Houston to attend training at Cobalt's corporate offices.  When the employee did not arrive for the training as scheduled, Ms. Trefren became concerned and called the colleague’s hotel room to make sure everything was all right.  Though the colleague stated on the call that she was "on her way," she never arrived.

Despite several more phone call attempts, the employee was unreachable so, without prompting, Ms. Freeman and Ms. Trefren took the initiative to leave work and locate her.

As part of the Ray Britt Award recognition, Cobalt made a total monetary contribution of $10,000 to the charities of Ms. Trefren's and Ms. Freeman's choice to support activities focused on the improvement of health, safety and/or environmental protection in Houston.

On Monday, March 28, 2016, Ms. Freeman donated $5,000 of the charity prize money to the National Alliance on Mental Illness of Greater Houston (NAMI) through their annual fundraiser, NAMIWalks.

NAMIWalks enables NAMI Greater Houston to provide support, education and advocacy to families affected by and people living with mental illness at no cost to the people who need it. 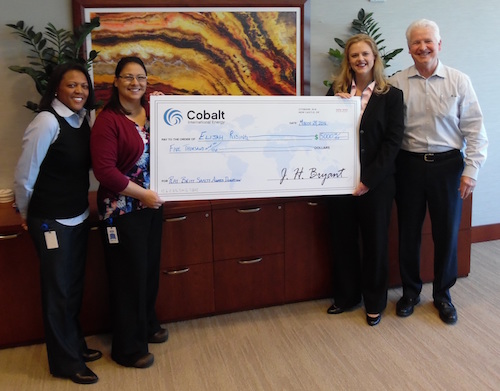 "NAMI Greater Houston applauds Cobalt International Energy for memorializing Mr. Britt and his dedication to health and safety in such a genuine, heartfelt way. Erin and Linda truly deserve this recognition for a job well done,” said Rachel Bromley, NAMIWalks Manager, NAMI Greater Houston.  “As health advocates ourselves, NAMI helps Houstonians cope with mental illness day in and day out.  We are especially grateful to Erin and to Cobalt International Energy for their generous gift, which will help us to do even more."

Ms. Trefren gifted the remaining $5,000 to Elijah Rising to support the Kendleton Farms project, which is assisting women who have survived sex trafficking, sexual exploitation, drug abuse, and violence live, heal, and work for a time in order to reenter society with job skills and a viable income. 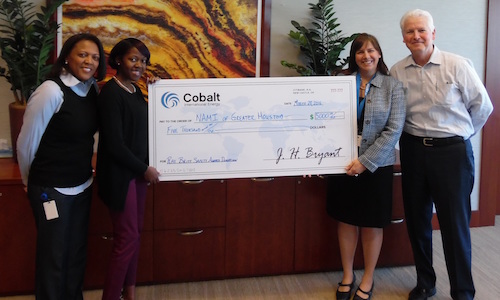 "We are thankful to Cobalt International Energy and Ms. Trefren for generously partnering with us in our renovation of Kendleton Farms. We look forward to using this gift towards the homes that will soon provide women and children a safe place to recover, heal and build a better future," stated Elijah Rising’s Elaine Andino.

Cobalt’s annual Ray Britt Safety Award is given in memory of Mr. Ray Britt, one of Cobalt’s Senior HSSE Advisors who passed away in 2014 after fighting an epic battle against cancer.